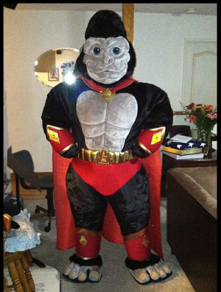 ​Since 1997, Critters By The Bay has been a volunteer group of colorful, friendly costumed characters that brings smiles to children and adults throughout the Bay Area. Whether it's a parade, a holiday at a theme park, or street festival, Critters always make the event more festive. Ultra-Gor, Masked Mustang, and Bull-Itt have been integral participants since each of their arrivals here on Earth, and loving every minute of it! But still they search for a Christian church or organization to lend a helping hand as well. 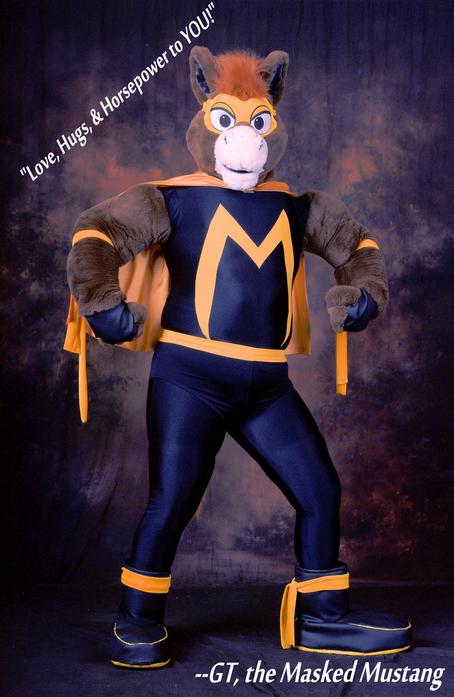 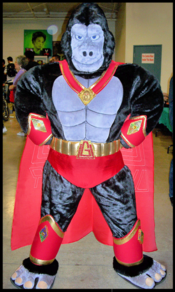 His real name is unpronouncable in the human tongue. His friends he's made here on Earth have named him "Ultra-Gor" for his being the strongest and smartest simian on the planet. He comes from a world many, many light years from Earth, where the dominant intelligent species most closely resemble Earth gorillas. Sent by orders from the Almighty Univah, the Creator of the Universe(who Earthlings known as God Almighty), Ultra-Gor has no super powers; only natural athletic prowess and wearing a technologically superior uniform permanently attached to his body. This uniform, developed by his native people reknowned for advanced technological breakthroughs, utilizes atomo-biocircuitry. With this uniform, he is able to teleport instantaneously, project forcefields, and has been known to augment the healing ability of whomever he embraces with his "gorilla-hugs".

His companion is Chris, a South Carolina native who most recently lived in Orlando, FL until a twist of fate on the GOOGLE search engine introduced him to another famous superhero, "Super Jayhawk". Since 2002, Super Jayhawk and Chris shared numerous emails. In late 2002, Chris received a revelation of Ultra-Gor's future arrival in his life. Sure enough, Ultra-Gor arrived and met Chris at Allied Costumes in Winter Park, Florida, in May 2004. Chris later decided that he and Ultra-Gor would have more fulfilling lives if they moved out west to San Jose, CA, and help Super Jayhawk with his heroic deeds for a group of costumed-character volunteers known as "Critters by the Bay". Ultra-Gor and Chris, and the rest of the Critters, have lived happily since arriving to the Bay area in 2005.

After several years of selfless volunteering and defending truth, justice and the Univarian way, Ultra-Gor decided that the accumulated wear-and-tear of such heroic activity merited an "upgrade" from Univah, to a better and stronger supergorilla. Univah agreed, and in early 2014 Ultra-Gor began his transformation, first to his intermediate "Version 1.5", and his completed form "Version 2.0" in early 2015. Now he's ready for continuing his mission of spreading the Gospel of God's love in his own supergorilla-way, for many years to come!

Ultra-Gor loves entertaining kids as well as adults, meeting and greeting them in public venues, and giving away as many "gorilla hugs" as he can. He generally is a serious, focused supergorilla, but occasionally his playful side comes out, towards people or anything that catches his attention. Some people find him a little intimidating at first, but they soon realize that having a supergorilla nearby makes everyone feel safe from any villains wanting to spoil a happy day! 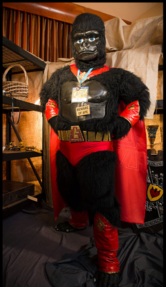 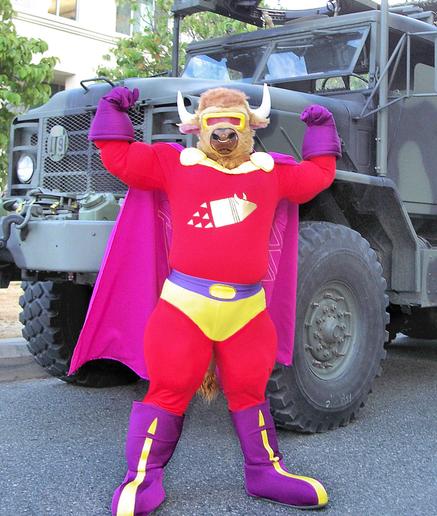 From another world in the same galaxy as Ultra-Gor's home planet, where the dominant species most closely resemble Earth horses, GT came to Earth in 2007 to help his supergorilla mentor with spreading the Gospel of God's love. He gives new meaning to the word "horsepower"! He's got super speed and the special mask he wears originates from the same technology found on Ultra-Gor's planet: Atomo-biocircuitry. This allows him to have vision enhanced far beyond the limits of a human eye, and to "see" on many different levels besides light and dark. But whereas Ultra-Gor is wise and focused on his divine mission, The Masked Mustang(who his close friends call "GT", because  of his super-speed) is more naive and prone to be distracted. He's still got a lot to learn, but his heart is in the right place and being with the little ones lifts his playful spirits.

Ultra-Gor's latest recruit for assisting with spreading the Gospel of God's love came to Earth in 2012. But he wasn't always a being on the side of God. Born on a faraway planet named "Bovinar" and at first named "Moorgarth", he was the only one of his kind to have been born blind. Bovinar is known in their local region of the cosmos as one of the most beautiful and majestic worlds. Unable to see all the wonderous beauty of his world, but still able to take care of himself from using his other senses, he became an enemy of his people and Univah for being given the seemingly cruel handicap of blindness. He became known as "Moorgarth the Destroyer" throughout his region of the galaxy. But Ultra-Gor saved him from his own self-destruction by taking him to his own planet Jaden, and through their miraculous atomo-biocircuitry have given him almost perfect vision via the Retinal Tachyon Visor, fly faster than his namesake, and shoot laser bolts of energy from his horns, that resemble bullets. There's no need to fear him anymore. Along with newfound sight, Bull-Itt has newfound love and kindness, especially towards kids! And he vows to pay for all of his wicked, crime-filled past, no matter how long it may take! And for Ultra-Gor, there is the added task of keeping Bull-Itt and GT on workable terms with each other; when Ultra-Gor brought Bull-Itt back to Earth with him, GT was NOT happy. He recognized Bull-Itt as the formerly known Moorgarth the Destroyer, and almost knocked him clear out of Earth's atmosphere! 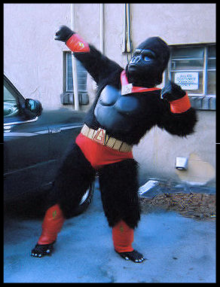